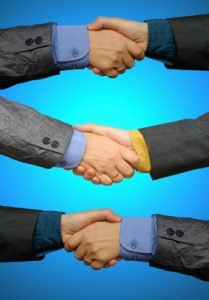 Networking is about building relationships and making connections with people who will lead you to jobs. What makes it especially effective is its quid-pro-quo aspect: it’s about helping others who can also help you. Bear in mind that it’s a process, and not a hit-and-run action.

Networking is based on the tested theory of six degrees of separation which states there’s a chain of no more than six people that links every person on the planet to every other person. The beauty of the technique is that you start with a series of contacts, and that series leads you to other contacts, which lead you to others until you’ve located an executive position. The progress is geometric because every lead can open the door to two or three other leads, and your initial contacts mushroom.

Categorize the people you want to network with according to three lists:

Today, we’re lucky to have so many diverse ways to develop, nurture, and connect with our network. Consider, for example, these online and offline venues:

Professional and business networking websites that focus on building a network of contacts that lead to business and job opportunities include LinkedIn, Xing, Viadeo.

There are thousands of associations that host online and face-to-face networking events. Weddles Association Directory can help you find one in your industry.

There are hundreds of blogs published by CEOs and senior-level management executives. By posting to their blogs, you are able to have a dialog with them and position yourself for one-on-one networking opportunities. For a list of blogs check out TheNewPR/Wiki’s “Who’s blogging/podcasting”.

Harvey Mackay, in his book Dig Your Well Before You’re Thirsty, recommends that to manage your network properly, you should contact each person every three months. He writes: “[Your] network provides a path, a way of getting from point A to point B in the shortest possible time over the least possible distance.” One of his maxims proclaims, “A network is an organized collection of your personal contacts and your personal contacts’ own networks. Networking is finding fast, whom you need, to get what you need, in any given situation, and helping others do the same.”

Bottom line: It’s all about being proactive, making the appropriate connections, and adopting an attitude of give and take.