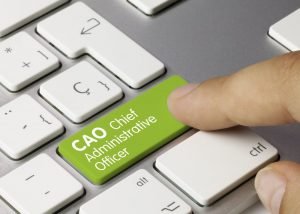 One motivation for hiring a CAO is the underperformance of one or more departments. The CAO in that scenario will likely get involved in setting success metrics, analyzing progress toward goals, and keeping the CEO up to speed with the department’s quest for success. The CAO will also often collaborate with departments that lack a C-Suite presence. Because of their intricate departmental knowledge, CAOs are C-Suite influencers with insider expertise.

In a case study about bringing on a CAO, executive-search firm Helbing & Associates, Inc., shared its client’s motivation for hiring this role: “[A] multi-billion dollar contractor, and longstanding partner of Helbling, sought to secure a Chief Administrative Officer who would provide additional depth to their C-suite, create a unified corporate service culture, and develop a long-term operational strategy.” The client company sought to collapse six corporate service areas – human resources, information technology, safety, risk management, legal, and compliance – into a single unit, thus “creating the Chief Administrative Officer (CAO) role [that] would provide structural relief to the CEO’s reporting structure and allow a new leader to dedicate themselves full-time to those six areas.” The selected candidate had been a Chief Operating Officer of a similar firm who offered the client’s desired “combination of operational, strategic leadership, profit/loss management, and corporate service experience and knowledge.”

The case study noted that talent pool was shallow for the CAO role. Aon Hewitt reports that, across all industries, just 20 percent of businesses have a CAO role. Insurance firms are the most likely (35 percent) to have CAOs, with the retail and financial sectors following, and the manufacturing sector having the fewest CAOs. Other industries include physician practices, law firms, universities, and municipal agencies.

Key Competencies for the CAO Role

The CAO role requires a synthesis of analytics, process, and strategy. A bachelor’s degree is the basic educational requirement; an MBA is an extra selling point.

When preparing career-marketing communications to send to employers, those aspiring to the CAO role should emphasize these qualities:

Here are a few suggestions for those seeking to break into the CAO role, expand their horizons in an existing CAO role, or even rise beyond the CAO role: